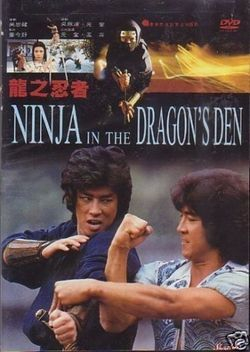 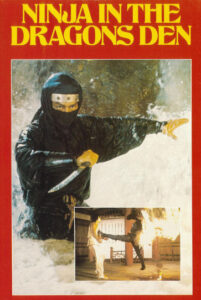 Ninja in the Dragon’s Den (Chinese: 龍之忍者) is a 1982 Hong Kong martial arts film directed by Corey Yuen in his feature film directorial debut, who also writer with Ng See-yuen, who also producer. It stars Conan Lee, Hiroyuki Sanada and Hwang Jang-lee. The film was released on 24 June 1982.

In Japan of the Tokugawa Ieyasu period, a young ninja named Genbu wantonly kills samurai and other government officials, leaving his clan to face the blame. When they hunt him down, Genbu and his wife Akane sail to China both to escape their wrathful kinsmen and for Genbu to complete his revenge by finding the last man he holds responsible for his father’s death.

That man, Fukusa, takes a peaceful life as a mirror maker under the name of Uncle Fu. He has a young protégé, Sun Jing, a smug martial artist who constantly tries to prove himself by taking up every opportunity to fight. Jing also perpetually teases his lecherous servant Chee and takes few things very seriously. When he sees his surrogate father attacked, Jing immediately rushes to his aid, but after various clashes he finds out that he and the ninja are evenly matched.

It is revealed that Genbu’s father was not killed by his clan members; he died as a hero in a rebellion instead. Ashamed of his own cowardice in escaping to China years before following that attempted uprising, Fu creates peace with Genbu. But before their final encounter, Fu took poison to restore his honor by his own death. Fu asks Genbu to kill him in order to spare him the last agony, which promptly leads to a misunderstanding between Genbu and Jing. The two battle each other to the top of Jing’s family temple and eventually settle their differences just in time to face The Magician, a spiritual boxer whose son Jing has insulted in the course of the movie.

The film ends with Jing and Genbu killing the Sorcerer, with some unwitting assistance from Akane and Chee. The latter promptly tempts fate by claiming the better part of the credit for this victory, prompting Genbu and Jing to teach him a lesson.